STOP the concept of EXERCISING, and start TRAINING.
K11 School of Fitness Sciences

The terms exercise and training are two separate concepts but often used interchangeably, and that isn’t correct.

Exercise has always been in the recommendations list of all the health and fitness professionals alike. 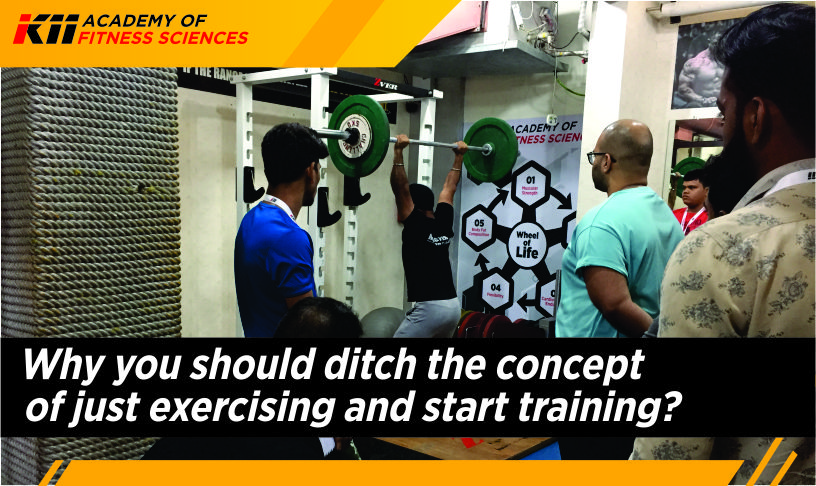 Just a cursory look at any medical organization’s website would show you exercise recommendations ranging from a mere 75 mins up to 150 mins per week. This may include any physical activity that puts your heart to work or body to sweat.

It is believed that exercising has a myriad of benefits, and we truly believe in those benefits, still, why do we keep falling off the radar? Why do our new year resolutions don’t even get to see the second month of our new year?

The answer lies within us…

Humans, like many other animals with a decent lifespan, have not evolved to be active without a definite PURPOSE.  A day spent watching Animal Planet and observing the behaviour of the animals would further accentuate this fact. Animals move only for food, life, reproduction and for guarding their territory.

A buffalo in the wild moves only while grazing or when it has to save its tail from a playful pride of lions; rest of the time is spent ruminating.

A leopard spends its entire day on a tree till it sees an ignorant little deer passing by, one jump from the tree directly on the petite little deer, and back on the tree with the carcass for the next couple of days.

Humans, too, like these animals don’t like to move unless it’s absolutely necessary because that would mean usage of energy – our fuel. How many times do you take out your car and burn fuel with no purpose of reaching anywhere… Animals (including humans), just like vehicles don’t like to move without a purpose, and EXERCISE PROVIDES NO PURPOSE TO OUR EVOLUTIONARY BRAIN.  This is the only reason why you have to force yourself to exercise and adherence to it is a major problem.

Do you think a lioness has to motivate itself to exercise 3 times a week? Hunger gives her the purpose to move.

We Humans, unfortunately, don’t have to move to answer for hunger calls; Swiggy does that for us.

So how do we maintain adherence to exercise? The answer is pretty simple – STOP EXERCISING, and start TRAINING.

When you hear the word training, which category of people come to your mind?  Athletes? Military personnel?

Warriors used to train in preparation for the war. The tradition has been taken many a steps ahead by contemporary soldiers. Athletes train to get better in their chosen sport with each passing session and season.

Generally, people who go to the gym for exercise have such goals as “burning some calories”, “pumping up the arms”, sweating, heart rate elevation, fatiguing etc. Essentially exercise today has plummeted to just being physically active so that either you look good or you don’t die of a cardiac arrest.

When you have such goals, the adherence becomes a problem, for now, you think, “so what if I didn’t sweat today I can do that tomorrow.”, “So what if I didn’t pump my biceps now, I can pump it in the evening.”; and if fear of death were to have any impact, there would be no smoker or drinker on this planet. This initiates the vicious circle leading to attrition.

But when you go to the gym for training with a goal of getting better with each session – I must run at least 100mtrs more than last time. I must do at least a rep more than last time, I must stretch myself atleast a cm more than last time- This is what keeps you going, for now, any session lost will be an opportunity lost to progress; now you have a PURPOSE TO TRAIN.

Athletes when they train, their goal is to just keep getting better than what they do. A name that comes to my mind is of Sergey Bubka, the Olympic gold medalist Ukrainian pole vaulter who broke the world record for men’s pole vault 35 times, beating his own record 14 times in the process. Do you really think athletes like Bubka have to adhere to exercising their sport? Their goal just keeps them awake, up and running.

Do you see such intense chase of one’s goals on the gym floor? Till you see that you will have to fight for adherence.

Train like an athlete on the gym floor, as there is no bigger sport than real life for which we all need to be prepared.

LOOKING FOR THE CORRECT TIME TO WORKOUT?

How old is too old to start exercising? 65 is still young!

Hire a Personal Trainer – It Works Out!

HUMAN PERFORMANCE NUTRITION (HPN)
Recent Blogs
WHY DO I TRAIN THE WAY I DO?
Exercise for Mothers during pregnancy
Fitness Trainer Certification – An Overview
BEING A K11 TEACHER… What Does it Take?
THE WORLD’S STRONGEST MAN
Open chat
Got any questions? Get in touch with the course counsellor!
Let's chat, we're human