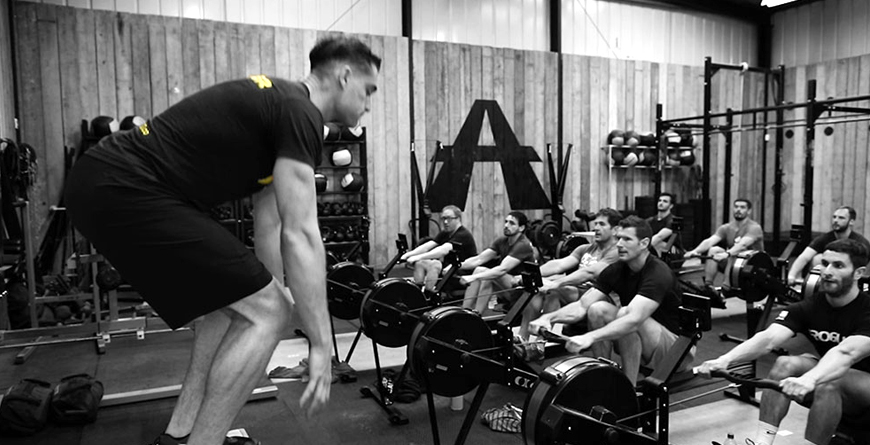 90% OF THE TIME I TRAIN WITH STRUCTURAL BI-LATERAL (BARBELL) LIFTS & COMPOUND UNSUPPORTED ISO-LATERAL (DUMBBELL) EXERCISES.
I do this to ensure that along with a tremendous impact on hypertrophy (There is absolutely no credibility to the notion that machine-based movements or isolation movements cause a greater effect on Hypertrophy); I also gain proportionately in strength performance.

It absolutely matters to me how big my arms look or how big my chest, shoulders, thighs & calves look or how wide & thick my back looks or how compact my waist looks. In this regard, I am the same as any muscle head out there.
BUT
Along with that, it matters as much, that if my Legs look big & strong, they also Squat BIG, that if my shoulders are boulders & my Pecs & Arms are bursting outta my Tee. They also should be capable of Benching, Over-Head Pressing, Deadlifting, Rowing & Chinning BIG.

In the pursuit of becoming more & more efficient at lifting heavier & heavier loads by the neural learning of the correct form & technique, given the correct nutrition, hypertrophy is inevitable & necessary.

Given a quantum of muscle, imbibing into your CNS the correct form & technique allows you to lift, to the max potential that your current musculature provides. Any further progress in strength will require an actual increase in skeletal muscle mass – HYPERTROPHY.

So while you hone your skills of lifting, DO NOT IGNORE BODYBUILDING NUTRITION GEARED TOWARDS MUSCLE GAIN, irrespective of whether you are an Olympic Weight Lifter, Power-Lifter, Strong Man Competitor, Recreational Strength trainee or anyone under the sun who is interested in gaining strength.

100% OF THE TIME I TRAIN WITH WEIGHTS THAT DO NOT ALLOW ME MORE THAN 4-5 REPS SOMETIMES UPPING THE INTENSITY TO 2-3 RM’S & ONCE IN A WHILE CHALLENGING MYSELF TO A NEW PR VIA A 1 RM. ALL REPS ARE DONE WITH A FULL RANGE OF MOTION.

Once you treat Weight Training as an end in itself, you realize that Light, Moderate & Heavy training is nothing more than a progression from Beginner to Intermediate to Advanced.
It’s just like graduating from Brisk Walking to Jogging to Running.
A Runner NEVER walks now, does he? Try telling a runner to brisk walk instead of running for a great workout & he will tell you to piss off and justifiably so similarly, once I reach the level of neural efficiency to hit intensities higher than a 6 RM WHY THE HELL SHOULD I LOWER INTENSITY TO HIT HIGHER REP RANGES?

Thus unlike weight training for strength where the power-related Olympic lifts, structural lifts such as Squats, Dead-Lifts & Overhead presses & Compound Unsupported exercises such as Bent-over Rows, etc. will have a carry-over on to a broad spectrum of activities requiring strength & power; when it comes to muscular endurance, you need to repetitively do activities that mimic the action that you need the muscular endurance for. Doing a 100 rep free squat workout will not give you the muscular endurance needed to run or cycle long distance. Doing 50 rep Push-ups will not give you the muscular endurance needed to punch through a 3 minute round of a boxing match… But working the Heavy Bag continuously for 5 minutes of punching will see to it that you gain the muscular endurance to keep punching hard throughout 3 minutes of a Boxing round. A Tennis player similarly needs to face a Ball machine spitting out a 100 balls at a fast frequency to hit 100 forehands or backhands plus cross-court running drills to build muscular endurance needed for his sport.
Hence High Rep Weight Training has nothing to offer when it comes to Muscular Endurance. It is although a good way to fool people via an elevated heart rate that they are having a very hard & productive workout.

Some might cite the “Size Principle” of Motor Unit (MU) Recruitment as a reason for training through all kinds of rep ranges ranging from 50 Reppers to 10 reppers in order to hit all your MU’s from the slowest twitch Type I to the fastest Twitch Type 2B’s. If you purely go by this physiological principle of MU recruitment called the “Size Principle” then this claim of hitting all the types of MU’s would be correct… But one needs to question whether or not, this is the most efficient way of hitting all MU’s. Well, the answer is an emphatic NO to understand this lets first understand the size principle.

SIZE PRINCIPLE:
There are lots of subtypes of Muscle fiber types, but for simplicity let’s just state the 3 broad categories:

Well, the SIZE PRINCIPLE states that even if you were to do a 20 Rep Max set to failure which would predominantly use the Type IIA, as we approach genuine concentric failure, the body would essentially call upon ALL the Muscle fibers at its disposal including the type I & the Type IIB.

But this principle is being misused by propagators of high rep training to convince people that progressing on to heavier loads that restricts one to lower reps & thereby increasing intensity is somehow NOT required. This thinking is FLAWED as well.

It is flawed because the SIZE PRINCIPLE also states that when doing the 1-4 RM’s the body again predominantly uses the Type IIB but by the time you approach failure will call upon all Muscle fibers including the Type IIB & Type I’s.

So now you decide, it is possible to train all the Fiber types by going to failure with a 20 RM weight & even with a 4 RM weight. So now in the interest of efficiency, why would you trudge along a 20 repper when the same can be achieved in a much shorter duration. The only valid reason for this is if you just do not have the mental make-up needed to heave weights that need the 4 RM type of effort on every rep, but since I do have the mental make-up needed & I want my past 25 years of training to show progression in Intensity, I will stick to what I have graduated to Which is a 1-4 RM Intensity.

Once my Motor neurological Pathways are set, I should stay true to the philosophy of strength training by progressing in Intensity towards the 3-4 RM’s in order to get the dual benefit of skeletal muscle Hypertrophy (Conditional to a Bodybuilding Diet) & corresponding increases in strength. I want every ounce of muscle that I put on to translate into better overall strength performance in every walk of life.

I have made a commitment to compete in bodybuilding for the next 9 years till the age of 50, simply to prove that muscle separation, detail, definition, cuts, being shredded or whatever else you may call it DOES NOT IN ANY WAY REQUIRE A HIGHER REP PROTOCOL. Also to prove that the Myofibrillar Hypertrophy which is the true Hypertrophy of the muscle cells will also bring along with it a greater volume of Sarcoplasmic fluid. So even for success in the sport of bodybuilding, the high rep low-intensity sets are uncalled for.

As far as Competitive Bodybuilding goes, when I win on stage as the best built man on that stage on that day. I sure as hell also want to be the STRONGEST on that stage irrespective of whether the sport demands it or not.

I have immense pride in not only the way my musculature looks but also what my musculature is capable off. When I show my Body on stage, I do not want to be in a position to hide my poundages. If I am badass on stage I also want to be badass in the gym.

THE PROTOCOL OF SCHEDULING IS ALWAYS BASED ON THE PUSH-PULL CONCEPT TO ASSURE MAXIMUM RECOVERY BETWEEN WORKOUTS.

Push-Pull is soundly based on the physiological rule of Skeletal Muscle recruitment called as RECIPROCAL INHIBITION which is an integral part of the pattern followed by your CNS in recruiting muscle & providing unrestricted movement.

So basically when you go through a pushing workout, you can be rest assured that your muscles involved in pulling are not engaged in the least.

This is what prevents overlap in a program & you TRULY & GENUINELY end up working Body parts ONCE A WEEK. All other Each Body-part Once A Week protocols are PSEUDO in this regard.

Thus this is the protocol that provides the highest probability for the longest durations of linear progression and thereby provides the best results.

At 41, I am nowhere close to “too old” when it comes to competing in bodybuilding or when it comes to, pushing my PR’s in the gym.
But at 41 I am definitely too old for TRIAL & ERROR I cannot afford to waste time on protocols that are not validated by science just to see whether they might work or not, No time for that.
At 41 I need to be Efficient & Productive at everything I do so as to achieve everything I want to by the time I touch 50. in the greater scheme of things 9 years is a very short time.

Every god damn exercise program/protocol in this world works for some people for some time.
I WANT TO CHOOSE WHAT SCIENCE TELLS ME WILL WORK FOR ALL PEOPLE, ALL THE TIME

Hence I will stick to what I know is right & thus carve out the shortest possible route to my goals.

IN SCIENCE WE TRUST

LOOKING FOR THE CORRECT TIME TO WORKOUT?

How old is too old to start exercising? 65 is still young!

Hire a Personal Trainer – It Works Out!

HUMAN PERFORMANCE NUTRITION (HPN)
Recent Blogs
WHY DO I TRAIN THE WAY I DO?
Exercise for Mothers during pregnancy
Fitness Trainer Certification – An Overview
BEING A K11 TEACHER… What Does it Take?
THE WORLD’S STRONGEST MAN
Open chat
Got any questions? Get in touch with the course counsellor!
Let's chat, we're human